An extra post this week as I wanted to share with you that Walking over Eggshells, my first book and biography, has been chosen as the Book of the Week by BookWorks. Here is the link to their nice colourful page.

https://www.bookworks.com/book/    If you do the control, click thing it will come up or it may work by just clicking on it.

As always technology has defeated me, as I wanted to cut and paste part of their page to put here, but of course it didn’t work did it.

However the nice sticker thing does, so you can look at that. 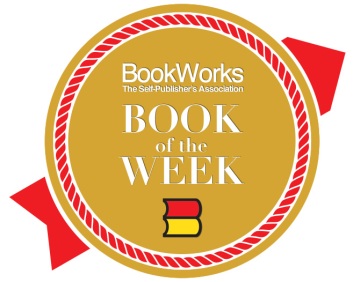 And while I’m at it, I’ll do the whole boasting thing and put in the 5 star badge from Reader’s Favorite as well.

I am very thrilled they have chosen my book, but it is a teeny, weeny bit embarrassing, since we are in the process of re-vamping the whole manuscript. Not that the story will change of course, but it’s going to have a nice new cover, and DH has decided he is going to reformat the pages and change the white pages to cream.

I did the original cover needless to say and at the time I was quite pleased with it as I thought it showed a little girl trying to run away from home. After several people asked me why I’d put a coat hanging on the back of a door, I began to have serious doubts about it. I’ve been searching for something new for a long time and here it is.

It’s amazing how much we’ve both learned this last (almost) three years about publishing and presentation and so hopefully in a about a week it will be on the internet with a brand new coat and if you buy paperbacks, in a nicer font and paper colour. Right at this minute DH is struggling to change the page numbers from the top to the bottom, (please don’t ask me why, he’s got a bee on his bonnet about it) so I’m typing very quietly. I do not like to disturb him when he’s being creative. I understand it’s far more important to be quiet and peaceful while formatting a mss than is necessary when it’s only the writing part.

Guess I better put in the link to the book?  http://www.amazon.com/dp/B00E8HSNDW

Will be back with an update soon and have a great week.

In answer to one query on my FB page, my next book is a pure novel based on the adventures of a young girl, recently married, to goes to live in a fictional African state and gets herself into all sorts of trouble.  I’m having a lot of problems with it as to start with, she won’t do as she’s told.  I have it all mapped out in my head, but she keeps going off on her own and after I’ve written this, I’m going to have to go back and re-direct her.  She just does NOT WALK OFF INTO THE BUSH AT THIS STAGE!!

My other big problem is that for so many years I have been writing for radio and television and stuff like advertising copy and mayoral speeches, so I keep forgetting to add any descriptive bits, so the reader knows what everything looks like.  This is a problem as you don’t do that for radio and TV, but for a book of course, some description is essential.  So I have to stop and mentally shake myself.

I don’t even have a title for this one yet, but hope to have it finished mid summer [northern hemisphere] and then take a backward step for book three which will tell about the stuff that happened while filming and general work on radio and in TV.  That should be more familiar territory.

I’ve been told more than once that I should stick to comedy, but what’s life if you don’t push yourself out of your comfort zone?

Well the riding school was an excellent example of me doing just that. We had really interesting lessons, dare I say unique ones?  For example, how to fall off your horse safely onto a mattress? If you’ve ever heard of any other riding school offering that, then please let me know!  I guess this was my sole contribution to safety in the years I ran it.  but that was the easy part, not one of the ponies was much over 15 hands, but the REAL trick was to get your pony near the mattress in the first place.  I can’t remember who donated that thing.  I do remember the stuffing was escaping in several places and I don’t think it smelled too good either!  In particular the kid’s pony flattened his ears and reared up as he approached it!  I kept telling him this was for a gymkhane and not a rodeo.

This important lesson was also important in preparing my clientele for their battle with the Selibe Pickwick Riding School in the gymkhana I had proposed.  Yes, they were a proper outfit, but we had spent hours bouncing up and down lunging for apples bobbing in the water, jumping along in sacks and passing sticks to each other in the relay races.

The rosettes were on order, and the t-shirts arrived, illegal copies of a Thellwell pony scene but they were extremely appropriate.

I’ll let you know how we did next time and if Amy [the book two heroinne] has learned to behave herself and do as she is told.

I want to use this blog to write some of the stuff I did not have space for in the book. I mentioned that I ran the worst riding school in the world, and that is true. How many other riding instructors have you ever seen at work with a copy of the Pony Club Riding Manual stuffed down the front of her jodphurs?
I would pick the children up outside school at two pm and drive them back to the stables. In those days I had this old, very old, beaten up Toyota Land Cruiser with an open bin on the back and a hunting seat welded up high behind the cab. There was always great competition as to who could ride on the seat.
I had as many stable hands as I needed but one day a small guy appeared at the end of our road. He had fled from Zimbabwe and his clothes were so threadbare they failed to cover even the important and private bits. I did not have the heart to turn him away and employed him. He was the best of all the guys, worked harder was the most reliable and so on. However one day as we were driving back at the beginning of the afternoon there were loud screams from the children behind. I slammed on the brakes, jumped out and went to see what the matter was………….
[this is called a cliff hanger right?] more in a few days, watch this space!
I can promise you I really did run the very worst riding school in the world. more about that later.