Firstly, I want to wish you all a fantastic 2018 with everything you would wish for – you can fill aspirations and resolutions in here ………… and that all those things you hope for yourself, your friends and your family in the coming 12 months will come true.

If you think about it, it’s all a bit of a daft hype isn’t it? The date changes and we all rush around starving ourselves to death, taking a deep breath and checking out the bank balance, or tapping away feverishly on the keyboard to complete that first/next book.

And all this because the date has changed and it’s not as if every culture even had the same timing either.

Did you know over 200 years ago they were not afraid to mess with the British calendar?

The year 1752 began on January 1 (no great surprise there) but to align it to the one used on the continent they dropped the Julian calendar and adopted the Gregorian calendar which meant losing 11 days in the September – so Wednesday 2 September was followed by Thursday 14 September that year which came in at only 355 days.

Would I have been cross if my birthday fell in one of those 11 days – no birthday party and no presents – though I guess I could take a year off my age, because if the date of the day I was born on didn’t happen that year …?

Just for interest (I came across all this delightful information as I was changing over paper diaries) in the era for:

Byzantine the year begins on September 14 ushering in 6527

The Japanese share January 1st with most of us, but they have already reached year 2678.

Finally, the Islamic New Year of 1440 will dawn on September 12th.

So, do not panic if you’ve broken or failed to achieve your New Year Resolutions by the middle of January 2018, you now have lots more dates to start all over again.

As usual, being so serious and level-headed I’m setting sensible, realistic goals for 2018.

Writing:- at least 5 words a day

House cleaning:- at least twice during 2018

Checking sales stats:- down to 549 times a day

Reading:- only one book a week

Leaving pc to do other things:- 20 minutes a day (that will include dressing, showering, eating, talking to DH etc, etc)

Talking: communicate with one other real, live human being who neither reads nor writes, once a month (that will be a tough one).

So, it’s none of this trekking off to the gym, walking up mountains, trying to touch my toes nonsense for me.

I’m already quite relaxed about my resolutions for 2018, and if I get a film contract, or a TV series or complete another book (Amie 5) it will be a bonus and I can reward myself with more cherry liquor chocolates.

That reminds me, I must check out the symptoms for chocolate poisoning. I’m knee deep in them here, not that I’m complaining – sheer bliss as the coffee jar is full as well. 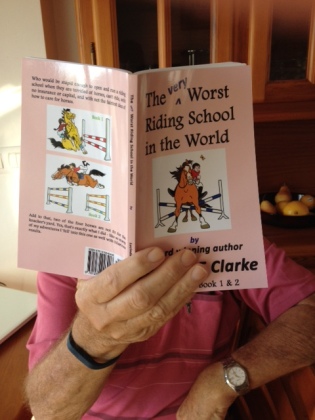 Final word, the paperback copies for The very Worst Riding School in the World have arrived.

That is part 1 and 2 – limited edition and never to be on open sale, but you might win one in a competition I’m having soon for my newsletter subscribers only. So if you would like to sign up, I’d love to have you.