Somebody, somewhere has got to slow things down a little, the years are flying past much too quickly. I believe the perception is that each complete year is a smaller fraction of your life so far and therefore appears to move faster. There is probably a mathematical formula in there but for someone who still counts on her fingers – and toes – let’s not go there.   A look back on 2018 – 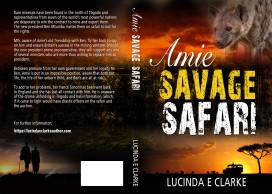 had a slump in the middle of the year – and I didn’t get Amie book 5 finished as early as I’d planned but it should be out very soon, I’m taking my time and not rushing it. I love the hyena in the top corner, once again Daz Smith has produced a cover I’m really happy with. We had a vulture in there at one time, but decided he crowded the picture too much so we flew him off.

But all was not lost as I published 2 back stories

We met Samantha, Amie’s elder sister in book 1 when she was the one leaking news about Amie to the press causing all sorts of problems and in book 3 she flew over to stay with Amie and Jonathon in Africa and was a very difficult guest. All is explained if you get to know her better in this comedy about her first visit abroad as she drags an unwilling Gerry into one disaster after another.

Why he ever married her I’ll never know. I think she might be good for another couple of stories later in the year. 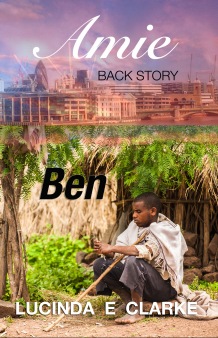 The second backstory tells us more about Ben. He was Amie’s cameraman in Amie Africa Adventure but when the civil war breaks out he disappears.

He pops up in Amie and the Child of Africa when Amie chases off to rescue her foster child and then in book 5 as …  but I won’t spoil the surprise!

In Ben we meet him as he is about to undergo his passage into manhood and what happens afterwards.

2018 was a great year for awards. I entered 7 contests and won awards in 5 of them, so I was really thrilled.

Readers’ Favorite awarded Amie and the Child of Africa a Gold Medal and Amie: Stolen Future a Silver Medal.

I was particularly thrilled as Headline books chose Amie book 2 for a possible publishing contract as one of 10 books entered in the competition – and I understand there were thousands. They didn’t take it in the end but it was a real boost that they liked it. Had a ball in America going to Miami and was thoroughly spoiled. 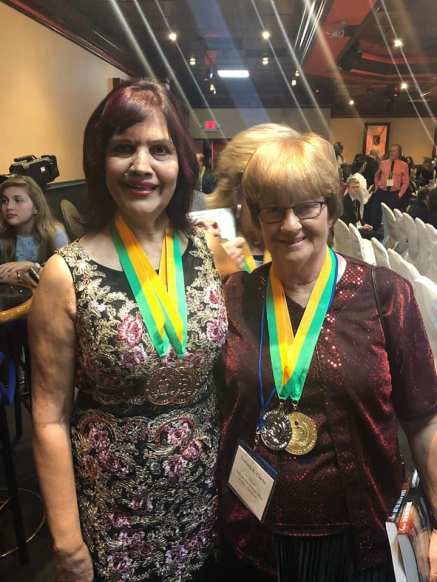 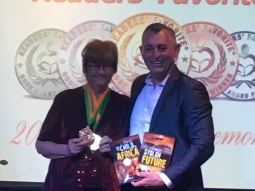 If I was hoping these would catapult me to fame and fortune – it didn’t happen.

As followers of my blog and FB page know, we live in a small rabbit hutch and there is minimal wall space. DH did try to put all these accolades into one frame but I’m not sure it works and it doesn’t hang on the wall either. I tried to frame the medals but made a bit of a hash of that as well. It’s not as easy as you think but I’ll have another go when the other medal arrives.

I had two large promos during the year. The first one was for Amie Cut for Life which incorporates the theme of FGM and I was invited onto Voice of America – Africa for my first TV interview. I blinked my way through looking like an owl skewered on the end of a cattle prod. The live FB page interview was a fraction better but not by much. I have the perfect face for radio and those interviews went better, both on Voice of America and on Talk Radio Europe in Spain.

None of these shot me to the top of the lists either.

I have popped the book prices up and down, taken part in joint promos, blogged, was a guest and had guests on my blog and tweeted my way merrily through 2018.

My Bookbub followers went up, my FB followers remained static (I’ve refused all those hearts, roses, cute kittens, top end cars, stethoscopes and little kid pics beside a variety of singled/divorced men offering friendship) and my twitter followers took a dive. My loyal mailing list remained pretty much the same but is woefully slow compared to other authors with millions of friends and fans, despite being offered a free book to join and an exclusive signed paperback of The very Worst Riding School in the monthly competition – it’s not on sale anywhere.

I’ll just pop the links in here in the hope someone, somewhere, reading this might just add their name too.

So, what of next year 2019? I have two wishes. To be a NYT Bestseller (or Wall St or similar) I’m not picky. The other is to prove the moon is really made of green cheese. I think it’s the second is the one I might manage to accomplish as it will be much easier.

I’d like to give everyone a huge hug for being my friend this year and reading my blogs and newsletters and FB posts. I still can’t believe how supportive, kind and helpful so many of you are.

It only remains to wish you all a wonderful last few days of the holiday and a fantastic New Year with everything you would wish for yourself and those you love.

As promised, this is how I would lay out a video script for the same scenario as last week’s radio play. I’ve taken the part where the Green Giant chooses Englebert, the third under trainee front doorstep polisher at King Charming’s Palace to lead the happy peasants against their royal masters. He’s a cute friendly fellow five and a half short of a six pack.

You may notice that there are no descriptions as such, simply what you see and what is said. I have battled with the ‘show don’t tell’ as a result after writing hundreds of scripts. Writing novels is so very different and I’ve still got a lot to learn.

“Come,” he commanded, “you will lead your people out of bondage. You will liberate their ills. You will speak for all the downtrodden in Charmingdon.”

“Me!” squeaked the man gazing into the Green Giant’s face. “Well, aw right, if yer want me to. I’ve always done as I’m told.”

The Giant pulled the man to his feet and led him to the front, amid cheers, hand clapping and stamping feet. If there were some peasants who looked a little startled by the Giant’s choice, he failed to notice.

“Here is your leader,” he boomed, waving the man’s arms in the air for him. “Greet your Comrade in Charge.” A renewed burst of cheering ensued and under the commotion the Giant bent to ask his name.

“No!” exclaimed the Giant, “you don’t make obeisance to me, we are all brothers together, one and the same. We share everything, we are all equal.”

“Ooh,” replied Englebert, “can I have this nice coat then?” he fingered the green jacket.

“No, you bloody well can’t,” snapped the august Party emissary, “and get your filthy paws off it, you’re making it all dirty. You can bloody well earn it like I had to.” He slapped away Englebert’s hand and turned to smile at the audience afraid of what they might think of his behaviour.

The Giant turned back to the crowd and held aloft an imperious hand. The peasants subsided and were quiet.

“Now is the time,” he announced, “for your chosen brother to address you all. I give you Comrade Englebert.”

“I don’t know where they all live,” complained Englebert.

You must know by now how ‘untechie’ I am so the columns are not the correct width, but I fiddled for ages and this is the best I can do.  There would be a column for timing if you were shooting a documentary that had been pr-scripted as you work to seconds in broadcast, but for a drama you would have a good idea about length from rehearsals.

For interest, an average 46 minute script (that would air for an hour allowing for add breaks) could be easily 10 thousand words.

Just in case you would like to read more, Unhappily Ever After can be found here. 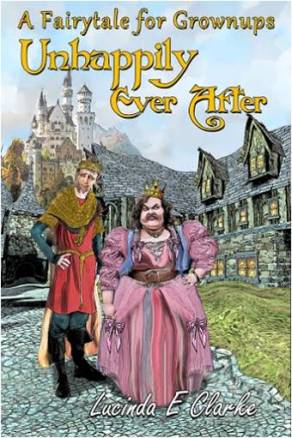 I have news to share but that will have to be next week, this is quite long enough!