This week’s guest also lives in Spain and her books tell us more about the rich history of this fabulous country.  I’m so glad I asked her as I’m delighted to learn she was also a teacher and then moved career. We have a lot of common.  In her own words:- 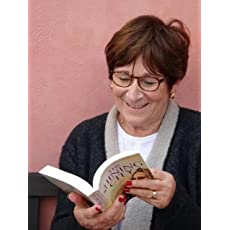 Thanks for inviting me to your blog, Lucinda. I’m a great fan of yours, so feel doubly honoured to be here.

Well, I suppose you want to know something about me and what has influenced my writing. If you have read any of my books, you can see that I’m very much a feminist at heart (although that’s a term that has been abused over time), and strongly believe that women should have equality in all things. In 2020 this may now seem to be a given, but I grew up in the sixties and seventies, in a time when it was harder for a woman to gain recognition in a man’s world. So it’s not surprising that all my books have strong female characters who manage to succeed against the odds. By that I don’t mean they are all Boadiceas, driving chariots and brandishing swords, but ordinary women who have been dealt misfortune or disappointment, and managed to overcome it.

The other strong influence on my books is perhaps more obvious. I have lived in the south of Spain for twenty-five years and Spanish history and culture have always fascinated me and have provided some of the most exotic settings in my historical novels. Here in Andalusia, we are surrounded by the art and history of the Moorish occupation, and I have incorporated that into two series of historical

fiction: The al-Andalus trilogy, set in Córdoba in the 10th century and The City of Dreams trilogy,  which follows on from that, with the protagonists now living in Málaga. There’s plenty of action and romance in the series, but it’s not all fiction. The historical part is based on hours of research, so for readers that know the area, it should make interesting reading.

I haven’t always been a writer, although for as long as I can remember I have wanted to be one. As with many people, retirement—or early retirement in my case—gave me the opportunity to fulfill a long-held dream. Writing about the caliph’s harem in 10th century al-Andalus is a long way from teaching primary children—my first occupation—or being a management training consultant, as I was at the end of my career, but just as fulfilling. 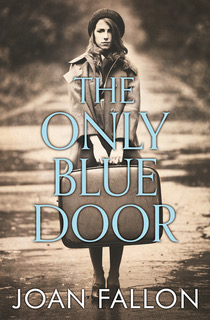 Sometimes I find myself labelled as a writer of historical fiction, but I don’t think of myself in that way. I write books about something that has inspired me and it may turn out to be a historical novel or it may be set in the 21st century. One day a few years back I read a short article about children who were sent to Australia as child migrants during WWII. I’d never heard about it before, and because I was intrigued I investigated further and the result was a very popular novel called The Only Blue Door. Inspiration can come from anywhere, and sometimes it is in the form of an unanswered question. The al-Andalus series came from a visit I made to Madinat al-Zahra, some ruins just outside Córdoba. The guide book told how it had been the most wonderfully rich, powerful and cultured city in the land, but had lasted only seventy-five years before it was completely destroyed. My immediate question was ‘How could that have happened in such a short space of time?’ There was only one way to find out: more research. 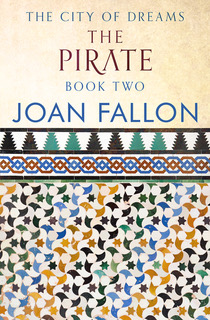 My latest novel, The Prisoner, will be available at the end of the summer. It is book three in the City of Dreams trilogy and will probably the last book I shall write about Moorish Spain. I have a yearning to try my hand at a crime novel, and already have a dead body in mind.

I love Joan’s books and highly recommend them. Here are a few more you might like to check out. 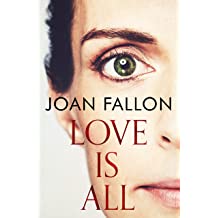 And the links to where you can find more about Joan’s books.

If you would like a guest post on my blog, just drop me an email lucinda@lucindaeclarke.com   or you can pm me on messenger.

In the Moors and Christians parades there are groups or filaes either Christian or Moor and they fundraise throughout the year to pay for the costumes and bands and props for the battles they fight. Some towns put up mock castles and use boats to arrive and for the parades there are often camels, fire eaters, elephants and dancing girls as well. 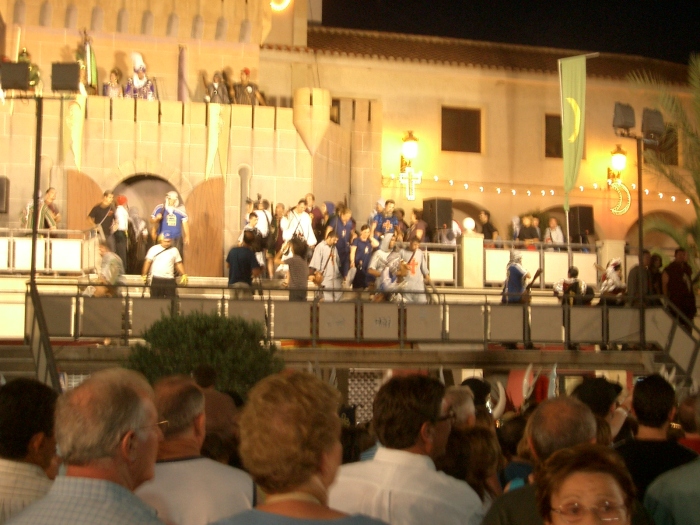 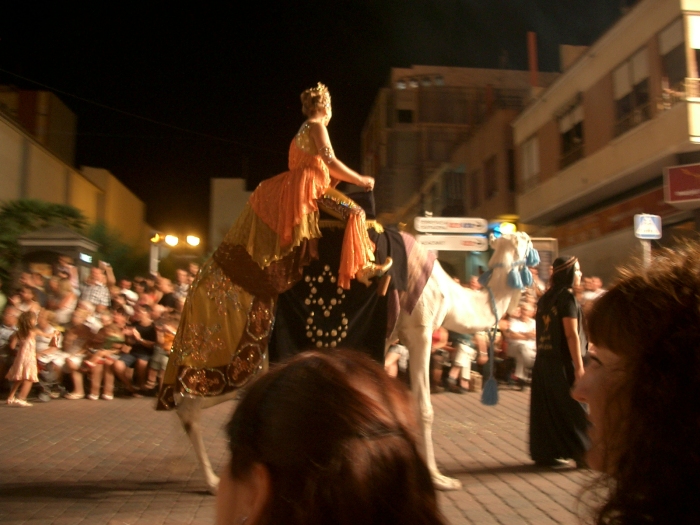 Possibly the most impressive are the horses. The Spanish Riding School you can now see in Vienna and Johannesburg with the Lipizzaner horses came from Spain. During the parade they perform amazing dressage steps dancing on their back legs – which is something not every horse can do. They take your breath away. (I always wear a good pair of shoes when I go to watch, as they come awfully close to my toes). 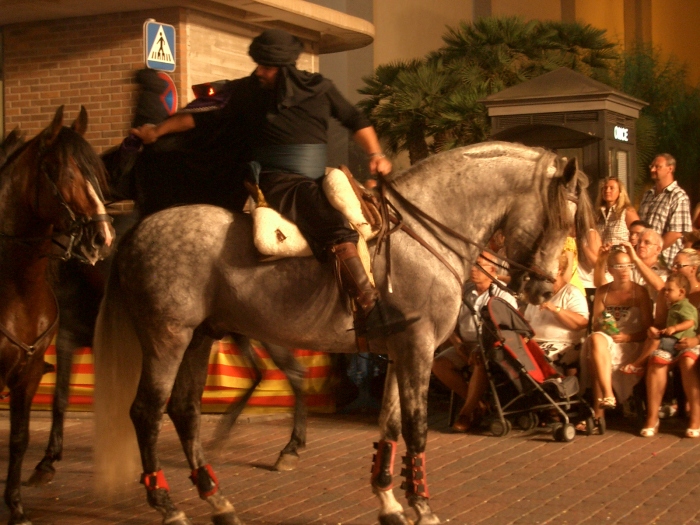 Isabella’s plan to get out of marrying the very elderly Portuguese King Alfonso aged 32, is to say she can’t agree unless the Cortes (sort of parliament) agrees. This is unlikely to happen as they don’t like the Queen and Alfonso is her brother

There follows lots of wrangling and bargaining from opposing sides, which I won’t bore you with except that Henry tries to make the marriage happen by offering his daughter to his half brother. Yet again, for the moment, Isabella escapes marriage as the kingdoms are about to go to war over all this marriage nonsense.

I was dismayed when we returned to England for a couple of months to discover that my youngest was telling her new friends that we had lions and tigers walking down the paths outside the mud hut we lived in. (They might have noticed the inconsistencies in this as there are no tigers in Africa). Thing is, they believed her and she thought this hilarious.

Africa is still a dangerous place the heat encourages bacteria and other diseases to grow quickly. The smaller creatures are the most deadly of all. 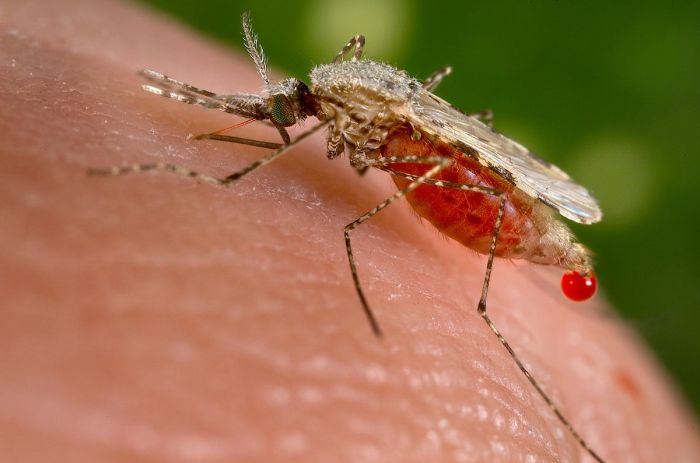 Durban had eradicated the anopheles mosquito that carries malaria – though a new strain now attacks the brain and there is a very low recovery rate if you contract that.

We filmed in a laboratory where they bred mosquitoes and I was curious to know how they fed them. Simple. They keep them in old plastic tubs covered with netting.

They also keep guinea pigs, shave their tummies, and then place them on the netting where they sit happily chewing lettuce leaves as the mozzies dine at the same time below. It doesn’t affect the guinea pigs apparently as they are used in rotation in a perfect symbiotic relationship. As long as they don’t try to shave my tummy!

This and other stories in the Truth, Lies and Propaganda series.

I thought today for a change I would hop back to Europe and share our local fiesta with you.

Every June for days and days the locals celebrate, not for tourists, but for themselves. They remember the 800 years domination of most of Spain by the Moors from north Africa and since 1990, the culmination at the end of weeks of all kinds of activities, is the Conquista and the Reconquista.

The first night the Moors come over the beach to conquer the castle – a little sad really as we don’t have a proper castle here, only a small lookout tower of fairly recent origin. But this doesn’t bother anyone. 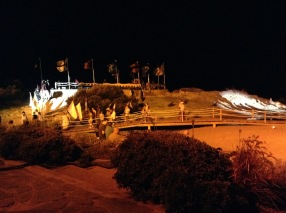 Sneakily the Moors invade at night under cover of darkness. In theory they arrive by sea, but these days they lurk behind the chiringita (beach bar) on the main strand. The performance begins at 10.30pm, almost our bedtime. 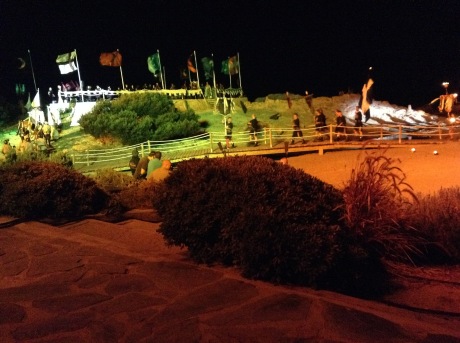 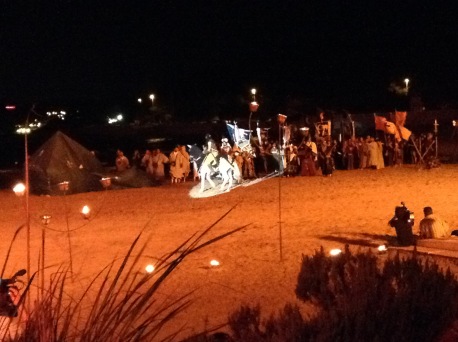 We know the Christians are in residence, as they skitter along the sand and pop onto the rampart above the rocks just before the Moors arrive. 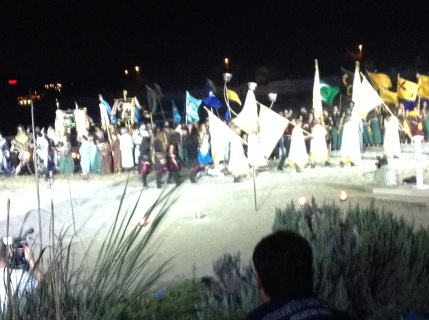 The Moors then try to persuade them to give up the castle and take a hike. First they send a demanding note which is theatrically torn to pieces. Next they try the bribery tack, boxes full of gold. No takers. Then come the dancing girls, all four of them, which, if you look at the number lounging around on the battlements, would have to work very hard indeed to keep everyone satisfied. The fire dancers and eater don’t make much impression on the castle residents either. Then they set fire to the cross – sacrilege – and then skilfully cut the throat of one of the Christian women.

Enter the horses, with battles galore and finally, in exasperation, they all take to the guns.

I don’t think I can post a video on here, but I’ll try on my FB page as the noise is truly terrifying. These are real blunderbusses, and they are filled with real gunpowder and wadding or something and they are really loud. They blast away for a while and frankly, they are lousy shots. The Moors are victorious and as the Christians march out of the castle in go the conquerors. 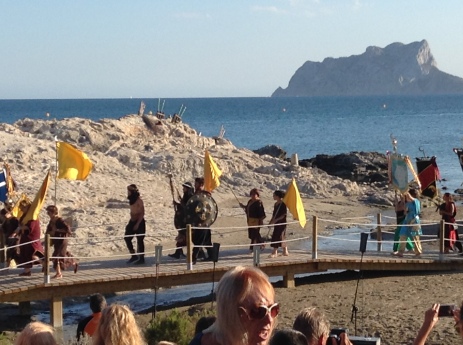 Eight hundred years is kaleidoscoped into twenty hours as the original inhabitants of our small town come to regain the castle. They arrive in broad daylight at 7pm, no sneaking around for them. They also try the bribery bit, with more dancing girls (I highly suspect it’s the same group from last night, so they must have changed sides earlier in the day – and I’m sure I spied the postmistress from the next village as she’s the belly dancing teacher).

The Moors are less than impressed, although the dancing was excellent. So, if the dancers failed, would the tumbling team (last seen at Benidorm Palace) succeed?

Sadly no, so after the gun-proofed horses have galloped about the beach for a bit fighting with real swords it’s back to the gunfire again and more fireworks.

A few people drop – despite the large number of guns most are really lousy shots, and the Moors give up and vacate the castle and the Christians take possession again. Mind those who have been shot lie for ages on the beach, probably tying not to breathe sand up their noses. 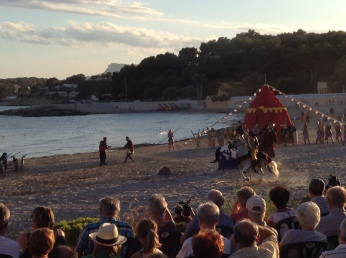 The third night there is the grand parade, which includes babies in push chairs, toddlers who can just walk, to grandmothers and every age inbetween. It’s a fantastic side of Spanish culture and family. I even noticed some Moors and Christians sharing a pizza after the battle!

I was going to include the procession in this post, but will save it for next week as I now have far too many pictures to include. none of them are brilliant and I apologize. The conditions for the equipment I had were not good, and the subjects had a terrible habit of jiggling around.

If you have a spare moment (this is the grovelling bit) I’d love it if you could vote for Amie an African Adventure in the ReadFree.ly Best Indie Books of 2016 – other category – this is the link – and you can vote 3 times.   http://www.readfree.ly/vote-50-self-published-books-worth-reading-2016-other/

And one other thing. Amie an African Adventure is on at $/£0.99 till midnight tonight – Monday, there seems to be an extra day I was not expecting. This is the link.