I don’t very often feature other writers on my blog but if I discover their books and I’ve read and loved them, then I want to share them with you.

Colin Griffiths is one such writer.

He was born in South Wales, Cardiff in 1958 and grew up on a council estate built to house the steelworkers. The place was called Underwood, surrounded by trees with just one road in. He was never sent to school – his father was a painter and took Colin to work with him.

Almost everyone worked at the steelworks back then and Colin was no exception. He was a steelworker for 22 years and then studied in his thirties to qualify for teaching and counselling.

He secured a job as national education officer for a trade union, but after 12 years he was made redundant and decided to remain in Yorkshire.

Colin is 58 now and does something much easier, he watches CCTV monitors in a nice warm office. He always wanted to write, and composed poetry in his teens – “they were a bit deep” (his words). He found them 40 years later and published them on Amazon – almost 250 of them – but says they are very raw and unpolished. He also wrote a horror book about Underwood, which he describes as a great grounding for his future books! Colin wrote his first novel ‘Never Say Goodbye’ just two years ago at the age of 56, and he’s currently working on his 10th book.

“I write almost every day, I find it a good release and I often go to bed, and lie awake thinking of ideas and scenarios.”

When Colin discovered self publishing and uploaded his books he received a lot of criticism about editing. (I confess to being one of them).

“I didn’t get it at the time. I have to admit and I still don’t know when to use a semi colon. But I do realise now the importance of having an edited book. Grant Leishman has edited five of mine free of charge. He is a diamond.”

Colin grew up reading a lot of Steven King books and his own are also in the paranormal or psychological genre. Of the 9 books he’s already published “Life for a Life” is the shortest but the one he holds dearest. He told me the indie author world is a great one and the majority of authors are a fantastic help. He’s come across some whose only intention is to knock and demean. He even had a troll – “in the end it was all so comical.”

Colin has two children from his first marriage, a boy and a girl and three wonderful grandchildren. Two of his grandsons are talented footballers and he loves watching them play. He’s been married to Michelle for three years, which he says “… proves you’re never too old to find love!”

“I still get an amazing buzz when someone purchases one of my books. The thrill of getting a good review is amazing. I write for the love of it now and if people want to read and enjoy what I write, then that is amazing.”

such a short time. My personal favourite is The Doll’s House https://www.amazon.com/dp/B017ZCOCCW  The characters in the house come to life at night with murder in mind.

Can Francis break the links that tie her to her evil mother? Can David persuade her to lead a new life, with him? Or will her mother stop them?

(Don’t you just love that cover!)

A Life for a Life 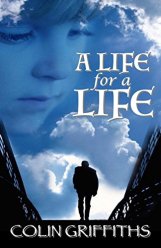 Gavin was eleven years old when his little brother died. Damien was the youngest of seven when his life was tragically taken away. Did the family pull together in grief?

ree years since the awful death of his three year old daughter Aimee.. Matt Conner did not take that loss well. For three years he had been medicated to help him deal with his loss. On the third Anniversary of Aimee’s death, he made the mental choice to start …

I hope Colin writes lots more books in the future, I’m in awe of what he has achieved against the odds.

Please re-blog and pass the word along to give Colin the publicity he deserves. J