There are two connections I have with this week’s author. I originally came from Dublin, and as you will see, Anne writes about the time when Dublin was still small but growing. When I went back a couple of years ago, it had grown ever larger, but parts were much the same.

The second connection is Vikings. I had no concept before I came to live in Spain how much terror there was from sea invasions – around Dublin it was the guys from Scandinavia, here it was pirates, and the Moors, who got to rule most of Spain for 800 years.

But I leave it to Anne to tell you her own story. 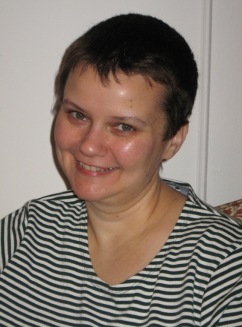 Vikings have become in romance fiction that “Viking Romance” is a subcategory on Amazon. So, when I was ready to write the first installment of my Ireland’s Medieval Heart Novelette series, I faced a big decision: Would there be Vikings?

And the answer turned out to be…sort of. While we don’t actually meet any Vikings in A Kiss at Vespers, those mighty Danes still play an important part in the story. They represent a threat, of course, on both land and sea. But Vikings also present an opportunity. No, not for a muscular romp on a pile of hides, ladies; this is sweet romance. Rather, they’re an economic opportunity.

Dull, you say? Not if you were a merchant in 11th-century Britain, looking out over the Irish Sea. You could practically hear the gold coins clinking. That’s why I set A Kiss at Vespers in the year 1008, when a little town called Dublin was growing by leaps and bounds, largely thanks to a change of heart by the Vikings who’d been terrorizing Ireland for centuries.

Some of them started to figure out that all the tromping around, stealing, and slaughtering might not be necessary. Here was this nice town – why not just settle there and find an easier way to make a living?

Merchants love a stable, settled population: they always need to buy stuff. In Vespers, the female protagonist, Asta, is the daughter of a British merchant. The novelette opens with Asta disguised as a boy, running away for love and adventure on one of her father’s trading ships bound for Dublin. So, you could say that Vikings made the story possible.

But Vikings also contribute a sense of drama to Vespers. In the early 11th century, only some of them had settled down. There was always the risk that they’d, you know, go marauding. Loot your village, attack you at sea, that type of thing. As a matter of fact…Oops! No spoilers here. You’ll have to read A Kiss at Vespers for yourself.

I wanted this story to focus on life in a monastery in medieval Ireland, and Viking characters tend to be distracting (in all sorts of ways!). But there’s another reason I let those helmeted warriors only have indirect influence: Ireland’s Medieval Heart Novelettes is meant to be a series. Since I don’t have any Vikings in this installment, that encourages me to put them in another tale. 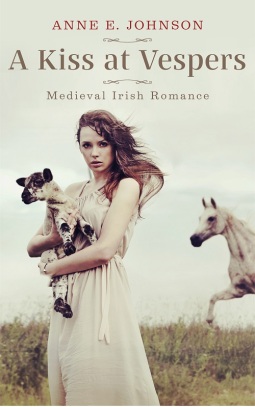 In 1008 AD, Dublin is just a small town, newly opened to trade now that Viking violence there has died down. A young woman named Asta runs away from her boring life in Britain on one of her father’s trading vessels bound for Dublin, hoping that she and the sailor she loves can find a new life together. But when shipwreck takes him from her, her whole world changes. She is helped up the rocky shores of eastern Ireland by handsome and enigmatic Brother Martinus, who takes her to the Monastery of St. Luran’s to recover. Despite his vows of silence and chastity, Brother Martinus is entranced by the beautiful maiden who seems delivered to him by Providence. Their unexpected relationship causes both of them to rethink their concepts of faith and love.

You can purchase A Kiss at Vespers as an ebook on Amazon, Barnes & Noble, iBooks, and most other online retailers.

Learn more about Anne E. Johnson on her website.