Of course, the main attraction in Prague is the castle. And, I know why they put castles on top of hills – so they could see who was coming to attack – but I don’t do hills. Luckily there was a bus that took us most of the way up, and dropped us in this square. 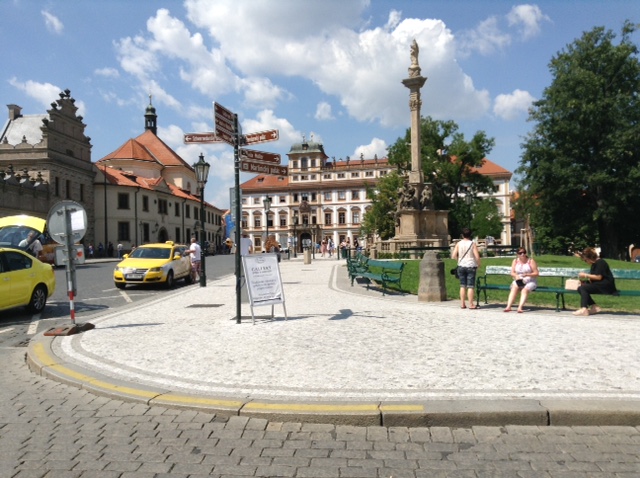 Considering Isabella had never met Ferdinand, I can only think she decided he was the ‘one’ as they were about the same age – she is 19 and he’s all of 18. She would have seen a portrait I’m sure, but boy did the painters in those days lie through their brushes.

But their royal marriage will be one of the few where the bride and groom are so close in age. Remember, while Disney tells us they lead happy, delightful lives, in reality they were just marriage fodder for the good of their country.

Ferdinand is introduced to her as “His Highness Don Ferdinand, King of Sicily and Prince of Aragon.” Unbelievably, he is indeed the man of her dreams. She is enchanted and Ferdinand? Ferdinand believes she is malleable. However, Isabella does not forget that Castile and Leon are more important than Aragon, Ferdinand will be given the title of King but out of courtesy only. I’m sure he was already planning how to change all that.

The girls and I grew very fond of Ntebeling and she said many times that she wanted to go on working for us when we moved into a place of our own.

I was happy about that, but then we were moved, from Gaborone the capital to Francistown 450 kilometres to the north. I was surprised when Ntebeleng said that was fine she didn’t mind moving. A couple of days later she asked if her husband could come too and I agreed. She also added that he could help around the garden if I liked. I liked.

We’d been there less than a week when I began to notice long queues outside our gate every afternoon. Something was going on, but I couldn’t figure out what. Have a guess before next week.

I have managed with the help of a kind friend to link my web page to my blog. So you can easily hop from one to the other – and view all my books on my site (hint). I have published 12 so far in 3 different genres, so there is something for everyone.

7 thoughts on “A CASTLE AND CATASTROPHE”