We had booked a tour of the Parliament building in Vienna and the MP’s were kind enough to leave the building so we could go and have a good gawk at it.

It’s a very imposing building (I’m convinced I was Christopher Wren in a former life, I love gazing at architecture).

I just love that sign telling you where you will find missing children! There didn’t seem to be any around to claim though.

Now that Carlos of Aragon is dead, busy haunting the streets of Barcelona, his younger brother Ferdinand is heir to the throne. We can forget about all the girl children, because under Salic law women cannot ascend the throne in Aragon. 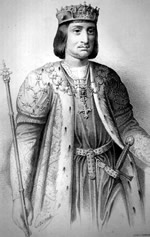 This is Ferdinand, but I couldn’t find a picture of him before he got a crown.

Isabella, still controlled by her mad mother spends most of her days praying, but Mummy is now really furious as King  Henry’s wife Joan (miraculously) produces a daughter and so Isabella and her elder brother Alphonso are a step further away from the throne to rule Castile. She is not a happy bunny.

Then, King Henry, summons Prince Alfonso and Princess Isabella to attend court at Segovia, probably so Henry can keep an eye on them. Isabella is now 11 years old and Alfonso 9.

Tribal medicine and herbal cures are still alive and well even in the cities in South Africa. You can often see the witch doctors (both men and women) also called sangomas, as they are often dressed more traditionally and are liberally adorned with beads, charms to ward off bad luck and have chicken bladders in their hair.

On two occasions I was told by the sangomas themselves that they woke in the night and followed a voice telling them to leave their homes and walk. They had no idea where they were going but followed paths and roads until they finally arrived – often after days – at the home where they were expected. In each case their host or hostess was an experienced witch doctor who told them they had been chosen to carry on the profession and taught them everything they knew. In both cases the newly trained returned to their home villages to practice.

Amie makes friends with Ouma Adede the best known and most powerful sangoma in Apatu – and I based her on my meetings with the witchdoctors I met and talked to.

6 thoughts on “PARLIAMENT AND POTIONS”