So, we are still in Vienna. I’ll have to drag this out a bit as we don’t really travel all that much though I would love to go away more. The problem is the difficult people you meet that demand money to cart you about and let you sleep in their hotels and houses that stop us traveling more.

One thing that really struck both of us while in Vienna were the reminders of the last great war. For example, there were these memorials. 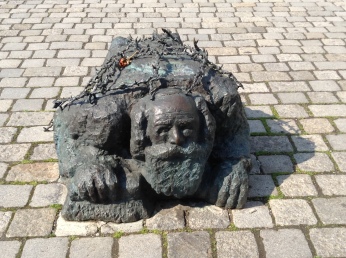 We also visited the Jewish Museum which had some excellent videos and I was riveted to the presentations – living history, people talking about their personal experiences. We spent a good couple of hours there, reading letters and stories about the resistance fighters and the concentration camps many of which were located in Austria.  (No photos allowed).

This is another reminder for the Victims of Holocaust. Under this square are the excavated remains of a Jewish Synagogue from the Middle Ages, which had seen the tragic end of the Jewish exhaustion during that time.

When we got back to the hotel, this was waiting for us on the table. I thought it was a really nice touch.

If you remember we are in Spain in the town of Avila population at the time 1451, with 1,285 inhabitants in the province of Avila, Castile and Leon. Now I hope you’re not going to be difficult and ask me how or why it was in 3 provinces – that’s what the book said.

It isn’t an easy or a happy childhood. Little Isabella’s mother, Queen Isabella is mentally unstable.  She has periods of hysteria, and her husband and her children are afraid of her. Her madness is an inherited trait from the royal house of Portugal. (Apologies to the Portuguese – that’s what the book said).

When little Isabella is only 3, her father King John II dies, and he is succeeded by his son Henry from his first marriage.  He becomes Henry, or Enrique IV. It all gets very complicated doesn’t it, but the NHS at the time was not as efficient and people kept dying all the time. (Have you noticed Disney never mentions this fact).

Now I promised you the story of the lap dancing club this week. Besides writing scripts for radio and television I was up for hire for anyone daft enough to pay me to write anything – as you can tell I’ve no morals at all. Hunger and shelter win out every time. But I was a little taken back when I was asked to write a radio ad for a lap dancing club.

I decided to raise the stakes a little here and it went something like this:

“Come to XYZ club and meet Mandy, who is working hard to provide for her poor granny who needs an expensive heart transplant. While she dances close to you (very close) you will be contributing to Help the Aged and making a beautiful girl very happy at the same time.”

“You can also get to meet Veronica, currently putting herself through post-grad school in micro-genetic bionics. She will be happy to chat with you over a bottle of champagne. Make it soon, as she will be leaving once she has been awarded her PhD.”

“You may be able to help Annette, who has no family at all. Sadly, they were all butchered in the revolution in her home country and now she is building a new life for herself. Come along and give her some love and encouragement.”

All lies, of course, I never got to meet any of them, and a guy who frequented the XYZ club told me none were a day under 40 and they’d all been around the block a good few times and looked very much the worse for wear.

I sighed and shamelessly ran all the way to the bank.

My web page – just in case you feel inclined. http://lucindaeclarkeauthor.com

Until next week, take care.