I have, I really have! What I mean is that I first met Val on Facebook, we got chatting, we enjoyed each other’s books, then we discovered a real live person we know in common and finally we met up twice – once in Amsterdam and again in Spain. We’re planning another meet up soon, so many of our early experiences are amazingly similar. A very warm welcome to a really nice person. Over to you Val.

Firstly, thanks so much to Lucinda for letting me sneak in here this week. I’ve coveted a spot on her blog for ages, so now I’m here I’d better make it good!

So what can I say about myself? That I’ve been writing all my life? That I’m finally finding my creative outlet? Yes, well, none of that is very interesting is it? Perhaps it’s truer to say that I’m a writer by accident and it’s all Peter Mayle’s fault. Yes, that man has got a lot to answer for in more ways than one and now I’m addicted.

The thing is that like Lucinda, I lived in South Africa for a long time. How I got there is a story I have yet to tell in full, but it had to do with an errant husband and being very cold in the UK. In other words, we urgently (and I say that with emphasis) needed somewhere to escape to and I was determined it should be somewhere warm. ‘I don’t mind being broke, but I do mind being cold and broke,’ was what I said to him before we decided where it was we were going to flee to. The immediate outcome was three years on a South African farm, which I absolutely loved, along with the heat, the drought, the primitive conditions…hmm, I think I’m going off track here, but actually I did love it all. The end result was that I was so happy there I spent a total of twenty years in South Africa.

When I came back to Europe in 2001, I missed it so much I decided to buy a barge and live on the water in the wettest country you could possibly find. There is a kind of logic to that but I’ll let you think about it.

Anyway, while I was still busy missing my former home in 2004, I read Peter Mayle’s book A Year in Provence. Now I know this book has had a mixed reception, but I really enjoyed it because I could see so many parallels between his experiences with local French country people and my own with South African rural people and I thought ‘I can do that’. And so I did. I wrote my own memoir about my life on our South African farm and I called it African Ways. It took me a while to finish it and then to publish, but it eventually came out in 2007.

Well, having done that, I got the taste and then the addiction for writing.

I went on to write a memoir about my first year of living on a barge, and then a novel about a child growing up on a barge in the early 1960s when the Cold War was at its height. Since then, I’ve notched up another four memoirs (mostly about boats and boating) and another novel. So, Peter Mayle, if you’re reading this, see what you started? 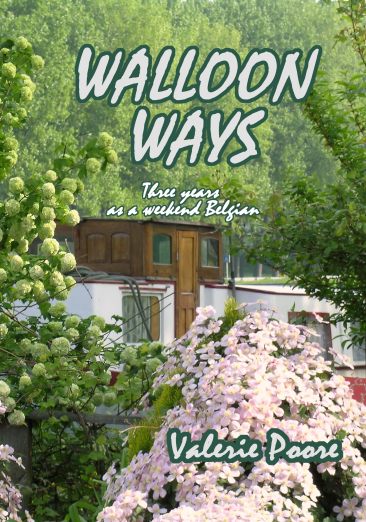 It is actually true I’ve always liked writing. I did quite a lot before when I was in South Africa; things like short stories that were read on the radio and radio plays that weren’t. But I’d never written whole books until African Ways. The trouble with Africa is it gets in your blood and so now I’m in the process of publishing the sequel to African Ways. Once again, I’ve wallowed happily in the memories of that fabulous country. I’m also working on a novel set in Kwa-Zulu Natal, one of its provinces and where I used to live, so you see I’ve got a lot in common with Lucinda. Oh and I’ll just say here I’ve loved all her Amie novels. They take me back there and I can wallow all over again (nothing like creeping round your blog host, is there?).

So with that, all it remains for me to say is a huge thanks to Lucinda for this opportunity to ramble on about myself and my writing. I’ll keep doing it until I drop whether anyone buys my books or not, but I’d thrilled if anyone reading this does give them a try. Just in case, the link to my Amazon author page is here:

Val, I’ve no idea why it took so long for you to be on my blog, but you can come again soon – I adore all that creeping (cheques in the post).

This last book on the left is highly recommended, I laughed out loud all the way through and although Val tells me it’s only partly memoir-based, I’m not sure I believe her 🙂