Well last time I left us half way up the twin towers, and after waltzing along the connecting bridge it was time to go higher. I noticed the nice (I love using ‘nice’ in my blogs as of course it’s a no no in books we all know that!) lady in the second bank of lifts wasn’t smiling. I don’t blame her going up and down all day. I wondered if you started working in the bottom set and then moved on up to working the top bank. I shall never know. The pictures speak for themselves, they need no words from me.

That first picture shows the information centre, and there was so much to read I almost forgot to look out of the windows. 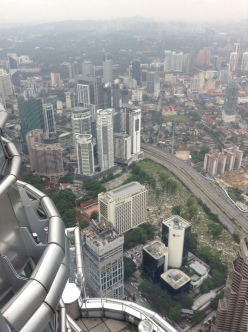 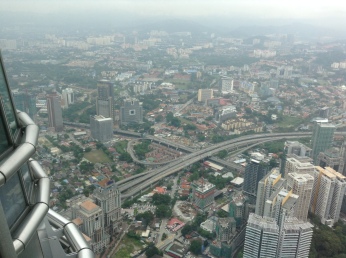 Next it was on to Penang – but there was a big problem – something we hadn’t planned for. (This is known as a cliff hanger).

Well that got Bertie (#1 son) married off at last, to Alexandra from Denmark but he was quite naughty (had affairs and such). His mother – Queen Victoria – despaired of him, but honestly she couldn’t talk as she holed up with a Scottish gamekeeper who went by the unusual name of John Brown. She particularly liked his kilts.

But then John Brown upped and died so she took up with an Indian servant and elevated him while she learned Hindi. She called him the Munshi which roughly translated means Munchi.  We are of course supposed to believe she remained quite pure and corresponded mostly on Facebook and Twitter from one end of the palace to the other.

I think we better move on to Bertie next week, I’m quite fed up with the woman but, until very recently, she was the longest reigning monarch, she sat on that throne for 63 years. That’s quite some feat and goes to show how well they made furniture in those days, no IKEA rubbish for her.

This is the section where I mention I write books and show you a picture of them, and very casually drop the links to my Amazon author page where you can see them all and go and buy them all.

Till next time take care.  🙂

30 thoughts on “LOFTY VIEWS AND LOVERS”