The morning continued visiting more temples and my head was spinning from all the images. They were just amazing. All that gold!! 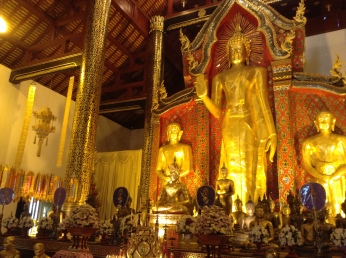 I admit to breathing a sigh of relief when I saw the tape at the bottom of these steps. I don’t do steps too well. 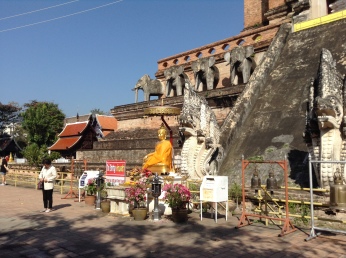 Everything moves with the times, and these waxwork images of elderly enlightened men are remembered with great respect. 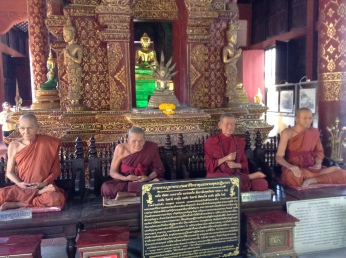 Everywhere we went, we didn’t know which way to look, they were all so lavish, yet the people who cared for them owned almost nothing at all.

As I visited so many of these shrines in quick succession, it was almost as if my brain refused to process it all. It was sensory overload.

Now the next monarch coming up had a pretty terrible childhood. Mummy was a bit of a monster if we are to believe the history books. She’d worked out that her daughter just might inherit the throne one day and thought what fun it would be to be regent. So she and her boyfriend (let me hastily add here she was now a widow for the second time), cooked up all the schemes they could while waiting for the fateful day. In the meantime it was very important to look after the daughter. This was taken to extremes – for example she was not allowed to sleep in her own bedroom, or walk down the stairs by herself. She was wrapped in cotton wool and oppressed beyond belief. She wasn’t even allowed to go out and hang around the mall with the boys.

The race was on – would William go to meet his maker before she turned 18? Watch this space!

And have a great week.

9 thoughts on “THE BIG TRIP AND TEMPLES – ENTER NEXT MONARCH”