We visited Khouang Si Waterfall. This was set in a national park, and although our itinerary stated we could take a dip in the refreshing, sparkling pools, they had to be joking!! I saw no wet suits and flippers for hire. We watched some gay young things stripping off, jumping in and frolicking in the water, I hope they have recovered from their pneumonia and are out of hospital by now. 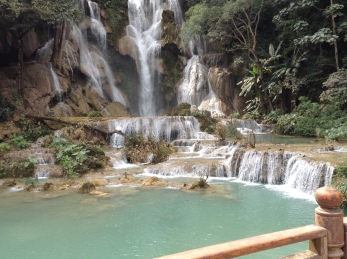 I was surprised to see they had a few bears I believe they rescued them to come and play on the tyres and wooden frames. 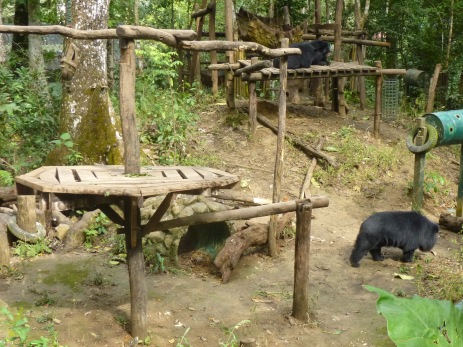 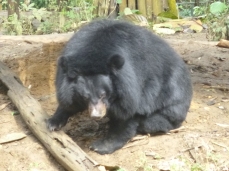 Then it was off to see – yes you’ve guessed it, another temple complex.

This was Wat Xieng Thong, a Buddhist temple, one of the most important Lao monasteries, located on the northern tip of Luang Prabang peninsula.

Sadly for some unknown reason, neither of us took any pictures of the little town of Luang Prebang itself. It was quite cute, with some Swiss type architecture, mixed in with low level modern concrete constructions and has been declared a World Heritage Site. For this reason traffic is strictly limited, which is just as well as the roads reminded me of Maputo not long after the civil war. A 4×4 is useful for the main streets.

Left to our own devices we dined in town and then decided to take a rickshaw ride back to the hotel. We agreed the few pennies for the trip and watched the sun go down as our happy cyclist pedalled along the road. Soon we didn’t recognize the route and still he pedalled. Past rice fields, a sort of industrial estate outside of town, and still he pedalled. We were getting seriously worried. On and on and on he went and then further and further. We weren’t being whisked off for the slave trade were we? No, not two old foggies like us. Suddenly he turned a corner, ignoring the speeding oncoming traffic and there we were, right in front of the hotel. He’d gone miles out of his way apparently to avoid that CIA bridge.

Well now that we’ve quite reasonably disposed of George IV the next king is William IV. When I looked it up on the net, it said that he reigned from 1830 until his death – well really, did they expect he would go on being king after that? A sort of ghostly spectre hovering over his court? He was only on the throne for 7 years, and for a moment I considered leaving him out, but thought maybe not.

I mentioned his white waistcoat as that is how I remember him in pictures, but I see he is actually wearing some very trendy white leggings. I suspect he also got those in Primark where I got mine. Mind, a closer look at the picture makes me wonder if he’s wearing anything at all between the top of his thighs and those cute little shoes with bows on them. I’ll leave you to make up your own mind.

The advertising bit: As soon as I press publish on this, I am going to raise the price of “Unhappily ever After,” my Fairytale for grown-ups from $/£ 0.99 to $2.99 so you might want to grab it while it’s cheap.

I have been asked by one reader to warn people where they read it. Apparently she almost fell off the treadmill in the gym she was laughing so much and nearly had a nasty accident. But I have written a disclaimer in the front that I take no responsibility for the characters for the dreadful things they say and the even worse politically incorrect things they do.