First of all I would like to say thank you for following my blog. I feel very privileged that you have signed up for an email every time I post. I read a lot of blogs and they are all so impressive. They are full of great advice to other authors, explain difficult and complicated pronouncements from publishers, researchers and the media. They contain wise, erudite, well researched content and links to further places for more enhanced reading.

And what do you get here on my blog? A load of rubbish, complete and utter nonsense, and if you believe anything at all, then maybe you should book an appointment with a one of those people in little white coats. I’ve heard they are very friendly.

It’s hard to think of anything to put on pixel right now as the heatwave sweeps across Spain. Not that I am complaining, I seldom if ever complain about the heat, but while I planned to edit yesterday afternoon, I dozed off and only woke at 6pm.

I should rename this Mushy Monday, as my brain has yet to kick into gear, so I thought I would include a short piece from Truth, Lies and Propaganda just for a change. I rarely go on about my books on this blog – had you noticed that? So here is the first part of a story when we slipped up while filming.

It’s rare that you get away with trying to cut corners – someone, somewhere will always notice – and we fell into this trap in a big way.

We were on another shoot for Durban Tourism. This time they were quite specific about what they wanted. Not just the usual sea, sun and sand, they explained, this is more for those looking for adventure.

“We need to show the different kinds of things the visitors can do, active things.”

“Fine,” we said, “what do you suggest?” Ah, that set them thinking, but eventually they came up with an answer. One of those wildly, adventurous, active things they wanted was fishing in the rock pools off the shoreline.

Now personally I wouldn’t go on holiday to catch fish in rock pools, especially things with claws and teeth, but I guess they knew what they were talking about and knew what normal people really liked to do on holiday. Who was I to question them?

This was a larger than normal budget shoot, it must have been for a really big, important expo. We could have real, live models from the modelling agency and, much to my horror, the clients said they wanted real, live fish as well!

I’d planned to stock up on fish props from the local toy shop, or if they didn’t stock plastic crayfish, (I had my doubts about that), at worst I would change that to the ‘ocean fresh’ counter at my local supermarket. But now that wasn’t going to work either if they wanted them alive. Carl knew of a couple in his favourite fish restaurant, but when he went to enquire about them, unfortunately they had been eaten the night before.

That was plan A and B up the creek, so we moved on to plan C. I would pop down as the fishing boats came in the following morning and purchase a couple of live crayfish from them. No, correction – I would get someone else to go down and buy the creatures, my bravery has its limits.

Plan C wasn’t going to work either. Crayfish were not in season and were nowhere to be found in the Indian Ocean off the coast of Natal. Could we think of a plan D? (continued Friday).

Today’s wild life picture is of a zebra, but you knew that didn’t you?

Well even my favourite queen had to go and meet her maker sometime and then England was stuck. Neither Mary, nor Elizabeth, nor for that matter Jane, left any heirs, so the English desperately hunted around for someone, anyone, who could sit on the throne.

In the end it was reluctantly decided that the offspring of that terrible nuisance north of the border would have to do. So off they trekked north on the N1, stopping only at the best service stations, and stormed over the border into Scotland and announced to James that he was going to be King James I of England.

“But how can that be!” he exclaimed. (They spoke like that in those days). “I am already King James VI of Scotland.” Now that was a problem and the counselors and Ministers of State went into a huge huddle until at last it was decided that he could be both. Immediately they ordered the best coach from Imperial Buses to conduct him to London but he sulked all the way south as he preferred to travel by train. 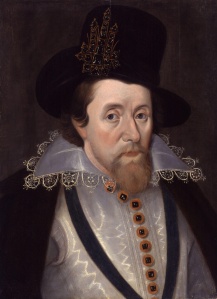 And you can see how sulky he was. He wouldn’t even smile when this photograph was taken. On Friday I will tell you about his personal habits – now that’s something to look forward to!.

While I was waiting for inspiration to strike this morning – frankly my brain is no more awake today than it was on Monday – I went cold when I remembered a couple of comments on social media this week. One was that religion, politics and income were not topics for general  conversation. Apart from books is there anything left to talk about?

The second is that what we put up on social media stays up there for ever and ever and ever. Now I have no problem with my books being for sale for ever and ever, but the drivel I write each week? Does this put me and all the other bloggers into the same category as say the politicians? (Not that I think I am as important as they are, I must add). In 1982 they said something that in 2015 they contradict, and you can bet that some reporter lurking somewhere, will remember this and make it very public. The result? This politician is irresponsible, tells lies, is fickle, two faced, inconsistent, backtracking – the list could go on and on and on. (Please note this shot below is just a general shot of politicians. I only slate them individually in my monthly column).

So I got to wondering how many times I had done the same thing. Well it’s early days yet so there is plenty of time for me to make an about turn. Problem is I can’t remember from Monday to Friday what I’ve written, and if we go back a whole month then I’m stuffed.

What has not changed though is the annual battle between DH and the ants. They are on the march again, and thank heavens they are small or we would be in big trouble. They have mined their way out of nowhere and once again demanded rent free accommodation in the lounge. I am now sitting next to a pile of eradication paraphernalia all designed to send these little darlings to ant heaven. I dare not suggest to DH that they are on a winning streak, as I don’t know how many cousins, other relatives and friends they have invited but the odds are lengthening by the minute.  If I was a great mathematician I could probably work out how long it would be before they brought the whole house crashing down around our ears, they must be hiding out in the foundations somewhere. 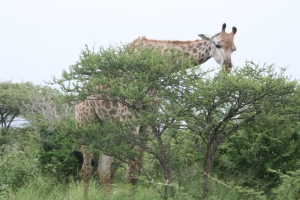 I won’t name it as I always forget how many rrr’s and ffff’s there are!

So, back in time to the greatest queen, Elizabeth I and more about her boyfriend. Here is his official pin up poster. Well there were all these rumours flying about concerning Essex, Robert Dudley, Earl of Leicester, [that’s all one person, with a lot of names], and most people were convinced he was the queen’s lover

He had been friends with Elizabeth for a long time, here is a photograph of him at her coronation.

I’m reliably informed he’s in there somewhere.  However, when he upset her by not solving the Irish Question, she had him flung in the Tower, but on the understanding he would give her a ring before the due time for beheading and she would pardon him. 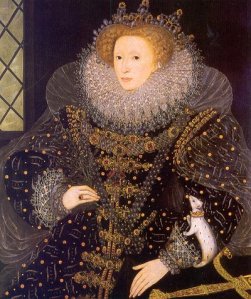 Unfortunately he got the wrong number and he failed to contact her, so he lost his head after all.

“God may forgive you,” was Brown Bess’s memorable comment to the telephone operator, “but I never will.”

So ends yet another sad love story.