Skip to content
HomeYOU’RE NOT ALONE AND QUEEN MARY

Please help to raise as much as possible through the sale of the book shown below to help those who need the support of the Macmillan Cancer Nurses. The Anthology will be available in paperback version shortly after the full release of the e.book which is scheduled for 11th July 2015. Please can you re-blog this post, tell your friends, utilize your Face Book contacts and let’s see how far around the world we can gather support.

The anthology has already proved that the theme of relationships is woven into its very fabric, given that authors have contributed short stories based upon it from

just about every corner of the globe. It represents the coming together of strangers to fight for a common cause, a cause that has no discrimination against gender, ethnicity, age or indeed, continents or state lines. It crosses oceans, mountain ranges, the most arid of deserts and the most inhospitable places on our planet. If there were ever a sinister underlying threat to humanity, cancer must surely be it.

Your support in buying this book, reading and reviewing it when it comes out and more importantly, telling your friends to give it a go, will make all the difference. If just ONE person buys this from your recommendation, it’s one person making a difference to thousands of other people’s lives both now and in the future JUST by buying.

When the anthology goes public and live on 11th July 2015, it will have taken EXACTLY 100 days from the time that I (Ian D Moore) first asked which authors were willing to help, to the final e.book publication of 28 stories from around the world, written, edited, formatted, assembled and with an originally designed cover – complete with a legal entitlement and charity backing… how amazing is that?

The international breakdown of contributing authors to the anthology is as follows:

Twenty-Eight talented Indie Authors from around the world, each with a unique short story written for this anthology. If I remember correctly the e.book is priced at $2.99.

And to help you buy it, you might use the gift voucher I am offering in my competition. Closing date 31 May 2015. Full details on my web site   www.http://lucindaeclarkeauthor.com

and these are the links to the book.

Back to the past where we left off with poor Queen Jane’s head being detached from her body. Very sad and not a little gruesome, but there was a lot of that around in those days, especially without refrigeration. 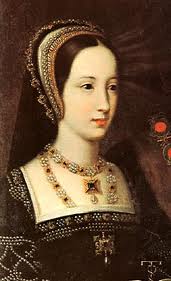 Mary was a precocious child. In July 1520, when scarcely four and a half years old, she entertained a visiting French delegation with a performance on the virginals. (I must hastily add that is a type of harpsichord).

It was all terribly confusing for her. First she was legitimate, then illegitimate and then legitimate again. She didn’t know if she was coming or going.

But come to London she did, when Jane was proclaimed Queen. (A side note here, we do have to thank her father Henry for giving her a different name – note Mary I). She was crowned in Westminster Abbey (I only added that as I have a nice pic of it).

She had to wait until she was 37 years old before she got her paws on the crown and got to sit on the throne, which she discovered to her horror was not all that comfortable.

So now all the people who were Protestants had to turn Catholic as that is what Mary wanted. If they didn’t she had their heads lopped off.

“Time to have a baby, we need the usual heir and a spare,” she was heard to say, and that is where all the trouble began.