When I published my first book in 2013 I had no idea what was involved. Of course we uploaded all the files, and made a cover and I wrote up my bio on my Amazon author page and then sat and waited and waited and waited and, nothing happened. Well that’s not quite true, I told a few friends I had self-published a book (pitying looks as it obviously wasn’t good enough to be accepted by a publisher) and in 12 months I sold 22 copies, plus the few paperbacks I’d bought to sell and stack on my shelf so I could pretend I was a novelist.

But I was keen to get the word out about personality disorders, so I contacted an author who had thoughtfully put his links in the back of his book.

Enter the world of Facebook, blogs, web pages, Goodreads et al. Previously I had always sneered at FB. Did I really want to tell 749 people I had just had breakfast, or I’d just replaced my underwear? No, I wasn’t into all that. I had a lot to learn. What started out as a marketing exercise, has resulted in making some really great online friends who have the same goals and interests – selling books, making our books better, finding ways of promoting them and meeting new readers.

The only downside to FB are the invitations for me to ‘get up close and personal’ with a variety of young men who think I look simply gorgeous in my picture (they need to go to SpecSavers). Despite me telling them I am old, retired, wrinkly and past it, some of them are very persistent.  Then I have to get really tough, and ask if they are prepared to pay for me to fly to Florida / Alaska / Kurdistan / Morocco etc and does that include my family of 16 who can’t bear to be parted from me, and do they supply a good quality brand of incontinence pants in their part of the world – if desperate by now, that last one ALWAYS works.

I hate to be rude to anyone, but FB for me is not a dating agency, and I horribly neglect my personal page, I rarely visit it. I owe many people on there an apology.

Time to go back in history, and I left you with an exploding Henry – so sad really. The story goes that some monk, was a little annoyed that Henry had knocked down his monastery and cursed him, saying the dogs would lick his blood (presumably after he died).

I’m not sure if it was a case of exploding coffins, but something similar happened. However it was all hushed up under a “D” notice and they refused to allow the TV cameras into Sion chapel where the event occurred. Sadly we will never know the details but at the age of 55 after all that food, all those wives, and all that demolition work, finally fat Henry was no more. 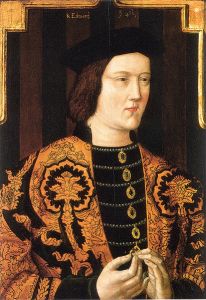 He left behind one sickly 9 year old boy called Edward (yet another Edward). He looks a lot older in this picture, but they insisted on putting lots of make up on him.

Henry had nominated a council of 16 people to rule for Edward, led by his uncle, so you can imagine the punch ups they had. 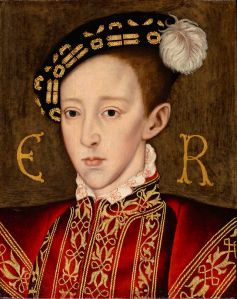 Edward VI was more interested in religion and forced everyone to become Protestant. He wanted to get rid of all the Catholics. This was to allow Bloody Mary who came later, to put all the Protestants to death for not being Roman Catholic. This is the first recorded English Population Control Act.

And yes, Bloody Mary comes next!

Don’t forget the competition to win a book and Amazon gift voucher. Still a couple of weeks to go!  Rules are on my web page lucindaeclarkeauthor.com