I was going to write about a funny thing that happened at the interview yesterday, but I think I have a better idea. However, let’s get that out of the way first.

I had agreed with the editor/reporter from a local newspaper to meet up in one of the nicest cafes in the village for an interview. They do excellent coffee and it was nice and warm, and all was going well, until he got out the dreaded camera.

Those who know me, will understand that the camera hates me with a passion, and since I was muffled up to the eyebrows, and the nearest make-up was 5 kilometres away I could only grin and bare it.

Suddenly our friendly waitress rushed out from behind the counter and went to grab the camera and tried to push us together. She wanted to be helpful and take a picture of the happy couple.

Was I relieved when the reporter was able to explain in Spanish why he was taking my photo and he certainly didn’t want to be in it as well. I thought she looked quite disappointed, but the thought was there.

Now I was on my way to bed last night when I had one of those light bulb moments.

Am I sitting scribbling my next book right now? No, I’m researching frantically for two of the history lectures I am giving next year. The first one is early in February, so I am really behind schedule. I’ve only written about half of it and I’ve still to find all the illustrations for the Power Point presentation.

Three thoughts sort of collided in my head. Firstly I promised to send a copy of my re-arrangement of English history to a FB friend, but it was too big to email through, and refused to leave my computer and leap out into the stratosphere. Then someone else mentioned I should turn my lectures into books, as these take a long time to write, and then I give the lecture maybe once or twice at most, to up to a hundred people and that’s that.  Possibly a bit of a problem in publishing, as I shamelessly cannibalize visuals and as the talks are free and sort of for educational value, I don’t check out the copyright.

Thirdly, another FB friend thought I was writing a book on Cecil John Rhodes – the current project –  and was looking forward to reading it.

Are you with me so far? Well never mind, I’m rambling, must be because it is the end of the year.

So when the light bulb went on, I thought why not share the comedy lecture I gave on all the Kings and Queens of England with you. I could post a couple of frames each day.

So here we go, with the first one or two. There was no way I could get the title slides to copy over as they were composites I can’t carry over, so please just try and imagine those ones.

All the Kings and Queens of England in 53 minutes and 13 seconds. [A lot longer via blog!]

“These lectures are great aren’t they, you always hear something new – – well this morning, you are going to learn – ABSOLUTELY NOTHING. Serious students of history may get a little upset, but perhaps YOU can amuse yourselves sifting the fact from the fiction – and there is PLENTY of fiction I can assure you.

Before I talk about the kings and queens, a bit of pre-history is in order. I am sure that most of you know that in the early days, England was just a jumble of individual sorts of states or tribal areas. Each tribe was ruled by the strongest and most ruthless of the chieftains and possibly by the ugliest.

THIS GROUP obligingly came out on a day it WASN’T raining and posed for me to take a quick photograph of them. I am afraid I must respect their privacy and not divulge their whereabouts. Now, this was a situation that cried out for invasion and in 55 BC Julius Caesar obliged.

Julius Caesar was Roman of course, and the Romans were the top nation at that time due to their classical education and having to learn all those difficult Latin verbs and their declensions.

Julius Caesar advanced very energetically across the English countryside and faced the Ancient Britons most of whom were well over military age and who spend an inordinate amount of time painting their faces blue. They simply refused to go out and fight before putting their make up on.”

Well you can see how things are going can’t you? So watch this space for more destruction of the history of Britain!

And a Happy New Year to you all!

To be quite honest I am very glad I live in Spain when it comes to Christmas time. Not for us the frenentic countdown, the dashing in and out of shops, last minute presents etc, the hoarding of enough food to withstand the next ice age.

Yes we have pretty lights in the streets, and the Christmas markets in every town, but the commercialization is nowhere at the level it is in England and the United States. For that I am glad, it keeps the stress levels down. It’s enough just watching the UK TV programmes with their hysterical screams about the one day in the year when you can accumulate even more stuff, to the too-much stuff you already have, and it’s often stuff you don’t really want either. 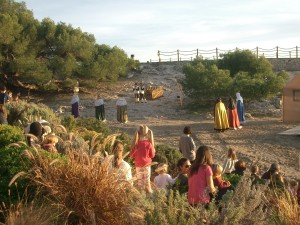 We usually go down to watch our local 3 Kings, as they slog across the sand and then are entertained at the castle by some belly dancers. We all know one is the local postmistress, but everyone turns a blind eye to this. Every year I feel sorry for the half naked dancers, their goose bumps the size of molehills, as they gyrate to the sight of Herod and the kings slurping back the wine. 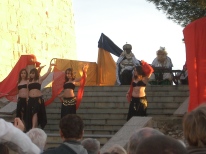 Then the Kings climb on their motorized transport and pelt the crowd with small boiled sweets as they go off to pay homage to the baby Jesus in the town square. 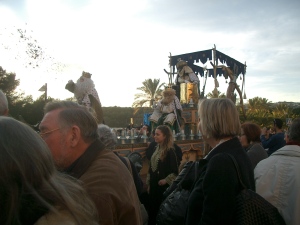 You need to be careful where you stand in the crowd, as these sweets are the small, hard-boiled variety, and they rain down on you like buckshot. Not that anyone is complaining, as we adults all help the little ones grab them off the road and rescue them before they roll down the gratings and are lost for ever in the storm water drains.

Now I’m not sure if this true, but I’ve been led to believe that the youngest baby born in the area is the one destined to be the special baby. I’m not sure how they choose the Virgin Mary, but she would appear to be aged between ten and twelve. On the

three occasions I’ve watched, the poor girl seems frozen with fear as she sits as still as possible nursing her newborn.

But that didn’t happen last year. The newest member of the community had frankly had enough – it was cold, so I don’t blame him – and he was screaming so loudly his real mother came to rescue him. Thus when the 3 Kings appeared around the corner there was no infant in sight.

But hitches like this are not important – and thank goodness we don’t have ‘Elf ‘n Savety’ breathing down our necks freaking out because Mary’s diaz has no safety rails, and neither are the Kings harnessed to their moving vehicle. Now isn’t that refreshing.

The Kings then settle on their stage round the corner, the white van backs up round the next corner, and the presents are unloaded. As the names are called out, each little tot goes up to collect his or her present and get a quick cuddle – no hysteria about paedophiles here, everyone loves children!  It’s gets a little fraught towards the end as those few tinies whose presents just happen to be at the front of the van, and so the last to come out, get a little jittery about being forgotten, but at last, everyone goes home happy and smiling.

What a beautiful way to celebrate Christmas!  In case I do not blog again before the ‘big day’, I’d like to wish all my friends, family, readers and fellow authors a wonderful Christmas and a Happy, Healthy and Contented 2015.

That title just about sums up my new book which hit the world last Monday, not so much with a splash but with a slither. I almost didn’t notice it was out on sale myself and when I contacted my editor, she hadn’t heard either. Yet I thought I had broadcast it from the rooftops, but with the amount of traffic on the net these days, anything can get buried and buried very quickly.
In fact I am beginning to have nightmares about Facebook and Twitter. Take last Friday when I decided to take a whole day off. I would not even turn on my computer. There it sat on the table glowering at me, but I pointedly turned my back on it and picked up – wait for it – yes, I picked up a book and spent most of the day reading. I had a wonderful day but oh dear, when I powered up on Saturday morning the payback was waiting for me. One hundred and seventy three emails, sixty two Twitter messages and nine personal messages. And that’s after one day!
What if I took a weekend off, or, heaven forbid had a two week holiday? Remember in the old days when you got back to find a pile of post on the doormat, or dozens of envelopes stuffed into your mail box? Well this is far, far worse.
While at one time I had nightmares about being dragged off by slave traders I’ve now become a slave to the social network.
Of course I dump a lot of them, but I do have to check in case there are a few readers who’ve written to tell me they’ve enjoyed a book, and I must reply to them if they have taken the time to write to me. [I also enjoy reading the compliments of course!] So I can’t just highlight the lot and drag them into the rubbish bin.
What has this to do with the title of this blog? Nothing yet, but I’m getting there.
Truth Lies and Propaganda, is the first of two books telling how I got into the media and earned my living as a writer. It takes you behind the scenes in the world of radio and television, mostly humorous and full of unbelievable stories which are in fact true. I was so privileged to be invited to so many places, and meet so many people, and apart from writing it all down so I can remember the events, it is fun to share with others as well.
Tomorrow, Tuesday 9th December ‘Truth, lies and Propaganda’ is reduced to 77p / $0.99 and ‘Amie an African Adventure’ is the same price until Thursday, so now is a good chance to get them cheap. OK, so I can’t order the ocean-going yacht just yet, but it’s almost Christmas, and time to share. Now I must wrap this up and go and write some Christmas cards and my annual Xmas letter.
Ah, just noticed, no picture, I’d better put one in, everyone else does. Now can I remember how to do that?

This is Gcina Mhlope, one of my most favourite people. She is a renowned story teller, and is on both my TLP books. She has traveled to America and Europe to share African folklore with thousands of people. A really great lady with so much talent.