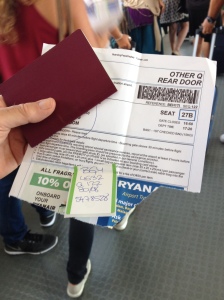 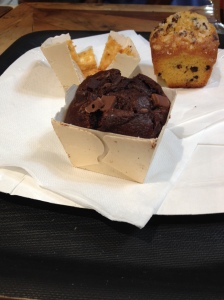 This is or rather was my birthday cake, by Tuesday morning when we were on our way to Venice DH called a truce. It was my birthday after all. I had further inflamed him the previous day by insisting we buy new charging points for the phones and iPads, before we explored the Duomo and then testing them in the next door cafe. I’m sure he was embarrassed, but I just told him to go away and pretend he didn’t know me, it was better than looking in rubbish bins wasn’t it? To add insult to injury, they threw him out of the cathedral for wearing shorts. This seemed very unfair, as there were lots of other people in there wearing shorts, and the only thing we could think of was that DH’s shorts did not cover his knees. Obviously God might be offended at the sight of DH’s knees, though I think they are quite nice myself.
The rest of the holiday was fine, except that the train took us back through Bergamo from Venice to Milan for the final night, so next day it was the coach all the way out again to Bergamo for take off. I had left all the planning to DH and he hadn’t noticed this small fact.
Venice was not really the best place for DH. He likes to know where he is at all times, and this can be tricky where the tiny alleyways wind around in all directions. Many hours were spent glued to the map trying to figure out where he was and the best way to go to the next interest point. Also DH is not particularly fond of large crowds, and there were an awful lot of other people there. But generally he was very brave about it all.
We are safely home, and although I have not included many finer details, we can dine out on this for years.

2 thoughts on “Not a Boring holiday”